Q. What State is Georgetown In? Is Georgetown a Part of DC?
A. Georgetown is part of the District of Columbia, separated from Northern Virginia by the Key Bridge. Georgetown was originally established as a tobacco port town in Maryland in 1751, and housed a lumber yard, cement works, and the Washington Flour Mill. It predated the establishment of the federal district and the City of Washington by 40 years. In 1871, Congress created a new consolidated government for DC, and Georgetown became part of the city.

Q. Where Does Georgetown DC Start?
A. Georgetown is located in Northwest DC, with the Potomac River to its south, Rock Creek to the east, Burleith and Glover Park to the north, and Georgetown University on the west end of the neighborhood. The Key Bridge connects Georgetown to Rosslyn, Va.

Q. What is Georgetown Known For?
A. Georgetown is famous for many reasons! For most, Georgetown is known for its shopping. Georgetown is the largest outdoor shopping district in the region, and M Street is recognized as one of the best shopping streets in the country. It frequently serves as the starting point for many visitors. The intersection of M Street and Wisconsin Avenue is the heart of Georgetown, with boutique-lined streets extending in all four directions.

Q. What Can You Do in Georgetown?
A. You can enjoy shopping, dining, history, arts, culture, and recreation in Georgetown. Visit our Calendar of Events for the full list of events and promotions offered each day in Georgetown, in addition to the Georgetown Business Improvement District’s annual signature events. We also have several Georgetown guides, including 25 Things to Do in Georgetown, that you can read here to help you plan your visit. 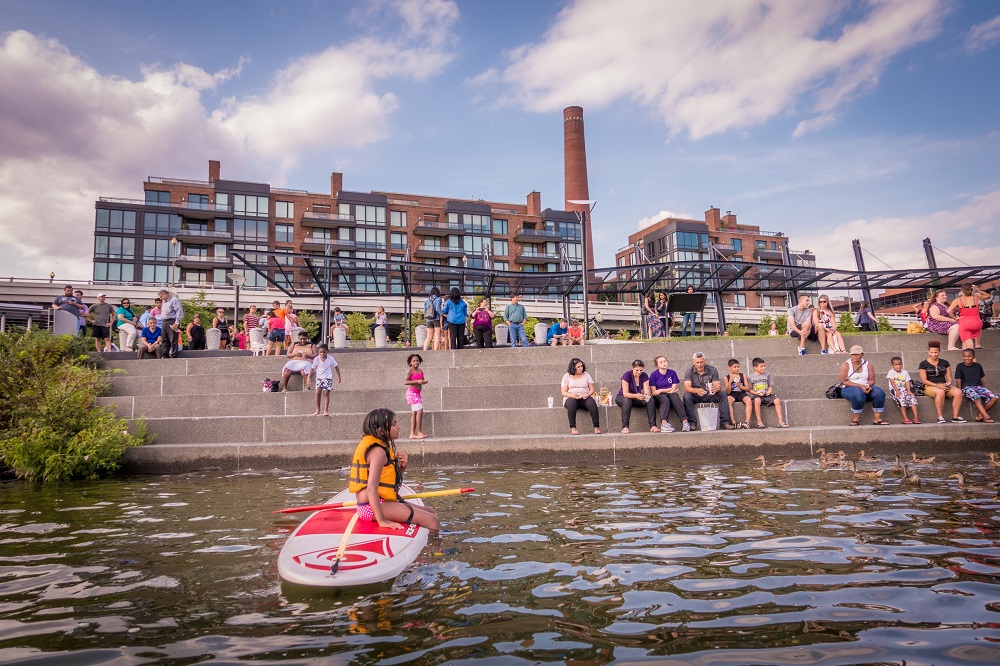 Q. What Stores are in Georgetown?
A. Georgetown has more than 150 clothing and fashion stores, from independent boutiques, to international brands and pop-ups. Visit the Fashion category under our Business Directory for the full list of clothing stores, and information on each.

In addition to clothing, those interested in Georgetown shopping can seek out the specialty shops offering everything from luggage to stationery, specialty gifts, bikes, and records.

Design, art and home décor shoppers can visit the Georgetown Design District, featuring over 40 interior design and home furnishings stores and art galleries that carry everything from modern to traditional furniture, antiques, accessories, and art. Cady’s Alley (with an entrance at 3314 M Street NW) is the heart of Georgetown’s Design District. Over 20 home furnishings showrooms and high-end fashion retailers are set in a unique cluster of historic industrial buildings that exude a unique European charm. District Doughnut and Kafe Leopold are also located within Cady’s Alley.

Q. What is the Main Shopping Street in Georgetown?
A. M Street is recognized as one of the best shopping streets in the country. The intersection of M Street and Wisconsin Avenue is the heart of Georgetown, with boutique-lined streets extending in all four directions and small, independent businesses lining Wisconsin Avenue.

Q. Where is Book Hill?
A. Book Hill – named after nearby Book Hill Park — is a quaint cluster of independent boutiques, art galleries, home décor and antique stores, and restaurants along upper Wisconsin Avenue, from O St to Reservoir Rd. There, you’ll find one-of-a-kind gifts, works of art, home furnishings and culinary experiences. Take the red and yellow-striped DC Circulator bus up Wisconsin Avenue, or enjoy a pleasant stroll by foot! 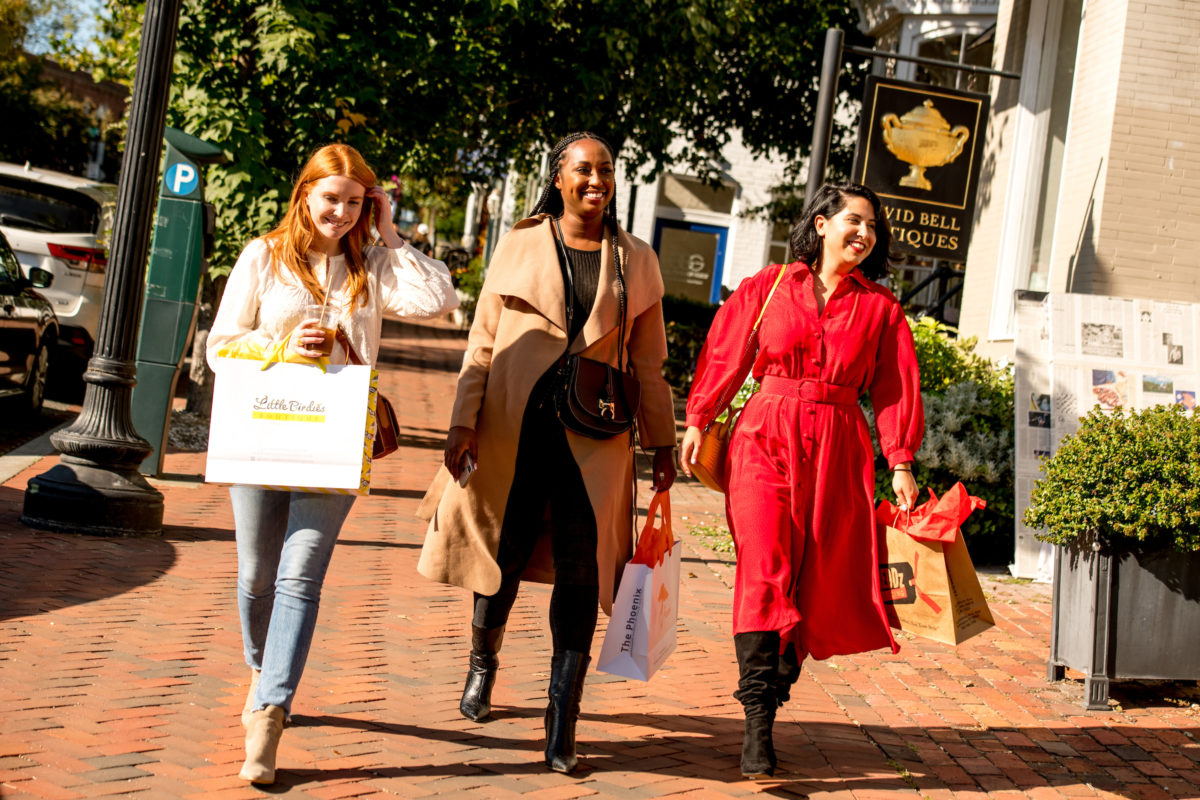 Q. What Restaurants are in Georgetown?
A. With over 100 restaurants that represent over 50 ethnicities, Georgetown’s diverse food and drink scene is only growing. Visit our Business Directory for the full list of restaurants, bakeries, cafes, and bars, which can be filtered by cuisine type.

Q. What Are the Best Cupcakes in Georgetown?
A. Everyone has their own opinion about the best cupcakes in Georgetown. Georgetown Cupcake is a tourist favorite that was made famous by the TLC show ‘DC Cupcakes’, while many locals enjoy weekly runs to Baked & Wired, near the C&O Canal. Sprinkles on M Street is another great option.

Q. Where Do Politicians Eat in Georgetown?
A. Café Milano, Martin’s Tavern, and Fiola Mare are favorite watering holes for politicians and celebrities alike.

If you’re looking for a post-dinner drink, sip classic cocktails at Bar à Vin and in the Proposal Booth at Martin’s Tavern (where JFK proposed to Jackie), or sample the beer selection at Pizzeria Paradiso’s late-night game rooms and The Sovereign. For people-watching, head to Café Milano, Bourbon Steak or Fiola Mare, or The Graham and Rosewood Hotel for rooftop relaxation. 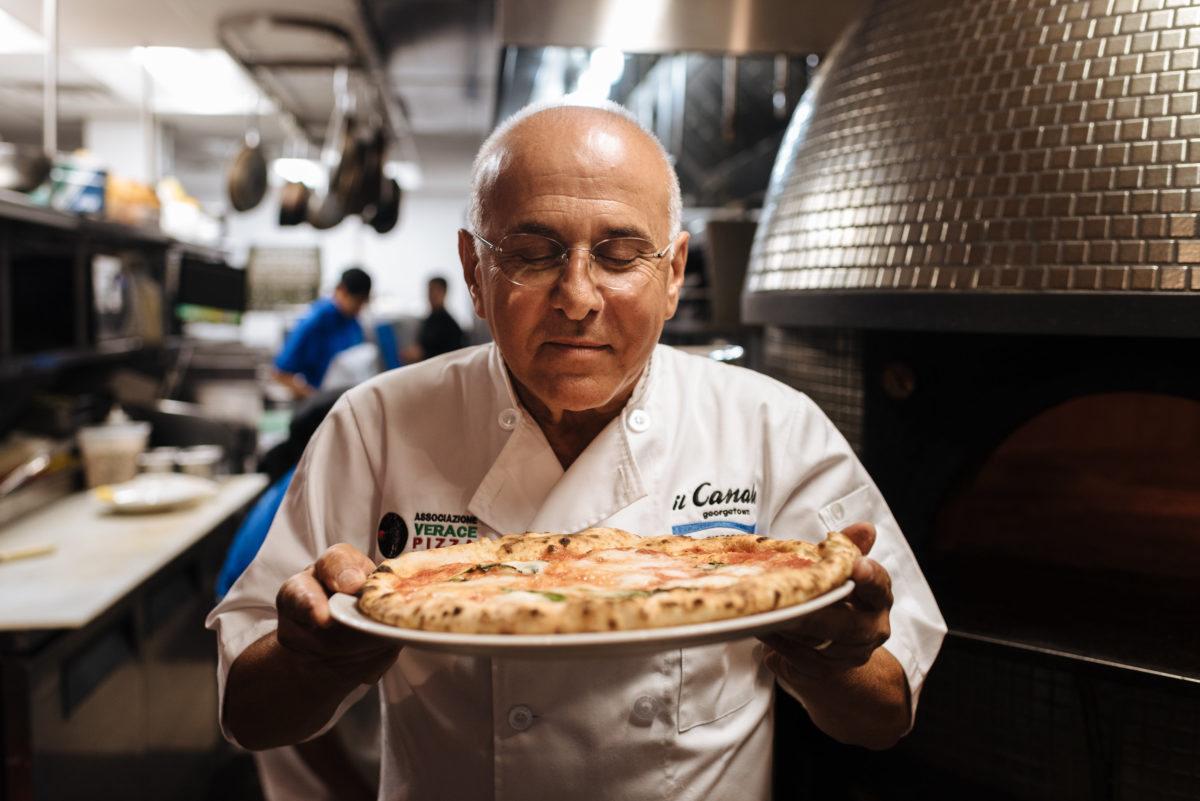 Q. Where Can I Park in Georgetown?
A. Georgetown parking is less overwhelming than it may seem. In addition to on-street parking, there are 20 parking lots and garages with over 3,800 total parking spaces. Visit our Getting Here page for a full list of parking garages and additional transportation information. 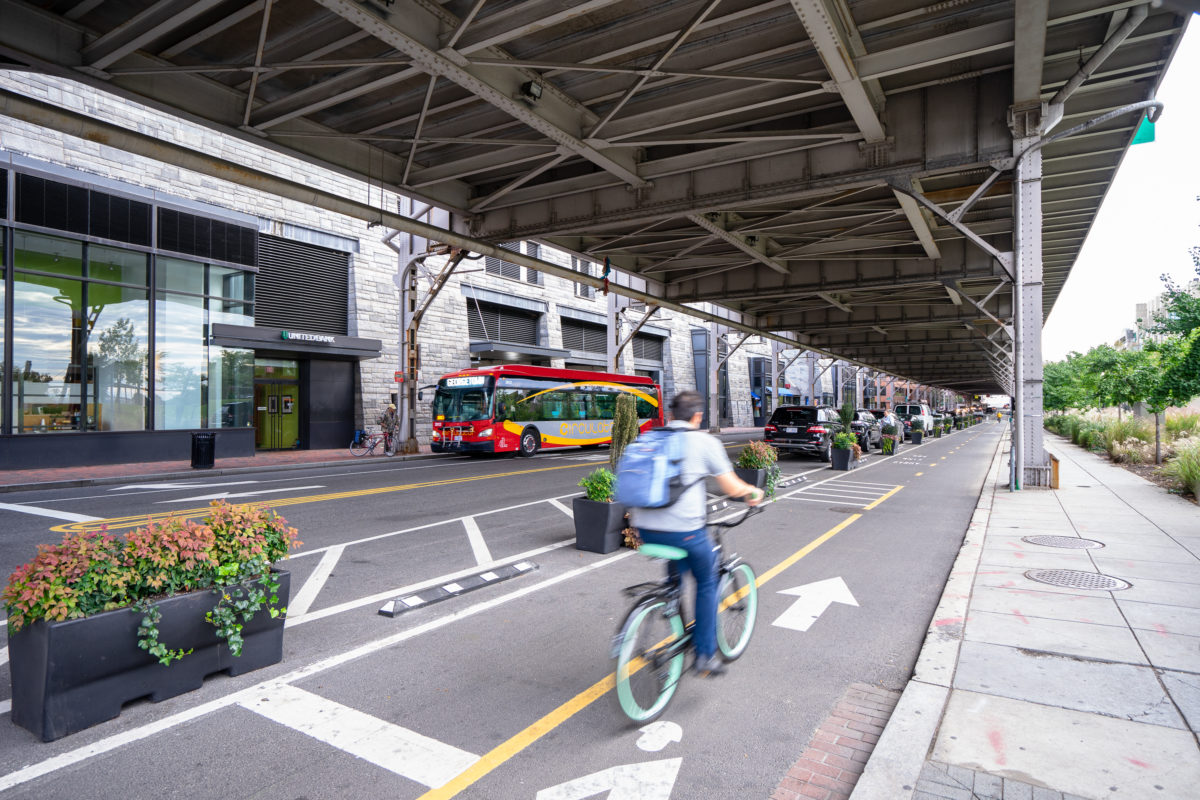 Parking & Getting to Georgetown

Next to Georgetown Waterfront Park, Washington Harbour is located at 3000 K St NW and is a dining destination in and of itself, ranging from upscale seafood to Fiola Mare to burgers, Thai food, and drinks overlooking the Potomac River. In the winter, the Washington Harbour fountain is converted into DC’s largest outdoor ice skating rink.

Q. What is Happening with the Georgetown Canal?
A. The Georgetown Canal Plan is reimagining the one-mile section of the Chesapeake & Ohio (C&O) Canal National Historical Park that runs through Georgetown—highlighting its national significance by reshaping this section into a must-see destination. The project, spearheaded by Georgetown Heritage and the National Park Service, with support from the DC Government and Georgetown BID, will preserve the Canal’s history and enliven the area with appealing new features and educational programs. Visit the Georgetown Heritage website for more updates on this project, and to purchase tickets to ride the new Canal boat – a one-hour guided tour of the first mile of the Canal, running through October 2022.

Q. Where is the C&O Canal Zero-Mile Marker?
A. The 184.5-mile C&O Canal towpath begins (or ends, depending on which direction you’re going) at the zero mile marker on the Potomac, by Thompson’s Boat House. 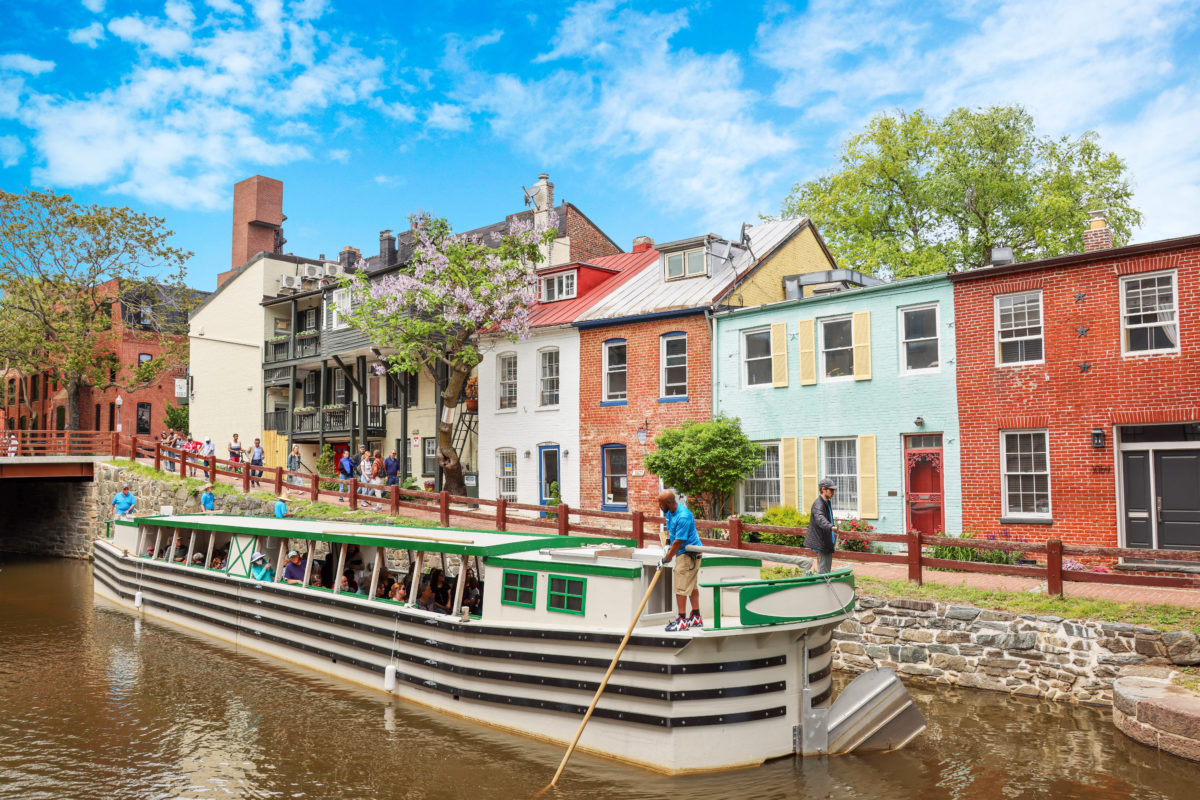 Q. Where is Georgetown GLOW?
A. Each year, the exact locations of Georgetown GLOW’s outdoor light art installations changes, but they are all located through the commercial district – from the waterfront, to upper Wisconsin Avenue. Visit our Georgetown GLOW website for information on this annual exhibition that runs through December and into the new year.

Q. What’s Kid-Friendly in Georgetown?
A. Entertained kids equal happy parents; that much we know. There are plenty of kid-friendly places and things to do with your kids in Georgetown, from free art classes, to bike rides along the C&O Canal, cupcakes, water fountain fun, bowling, dining specials, and more. Read our Kid-Friendly Guide to Georgetown for more. 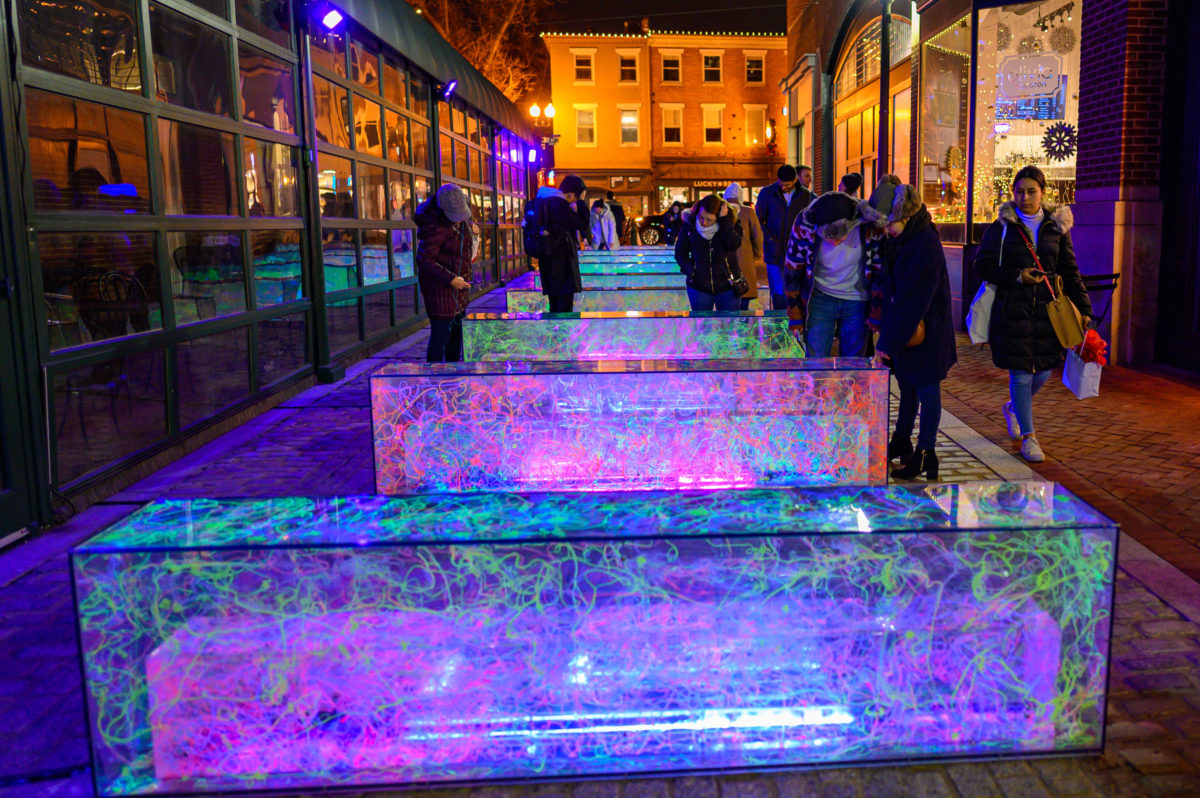 Q. Who keeps Georgetown’s streets clean every day?
A. Contracted to Block by Block and overseen by BID staff, a Clean Team crew of 14 full- and part-time street team members is on the street every day of the year except Thanksgiving and Christmas. The Clean Team sweeps 142 block faces, 20 alleys, and the C&O Canal Towpath each day, and assists with the set-up and breakdown of the BID’s many events. The Team also performs nightly power washing of sidewalks and alleys in warm weather, oversees rat abatement and control, and removes snow and ice from crosswalks and pedestrian bridges in the winter.

Q. Where is the Georgetown Visitor’s Center?
A. Georgetown does not have a visitor’s center. Visit our website for an official map and guide of Georgetown, including information on parking, shopping, and dining. 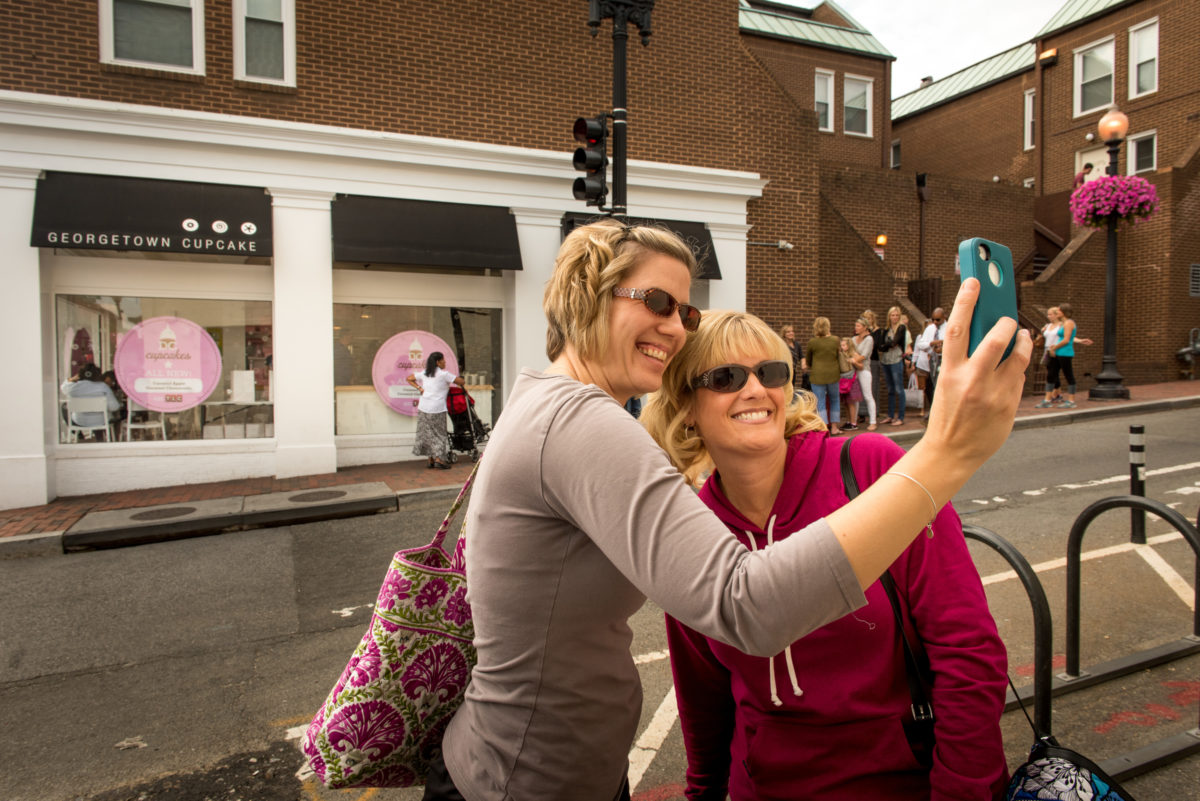 Q. Where Did JFK propose to Jackie?
A. JFK proposed to Jackie at Martin’s Tavern, a Georgetown institution that first opened in 1933. The proposal took place on June 24, 1953 in Booth #3, now known as The Proposal Booth. Our Kennedy Walking Tour guide offers more insights (and addresses!) on all of the Kennedy’s Georgetown homes and haunts.

Q. Where are the Exorcist Stairs?
A. The iconic shot at the end of the movie was shot at 3600 Prospect St. These 75 steps were designated a Historic Landmark in 2019 and include a commemorative plaque. Our byGeorge blog on Exorcist expert Andrew Huff offers a behind-the-scenes look at Georgetown’s role in the movie, and our Georgetown Movie Sites guide will take to all of the other famous Georgetown movie backdrops. 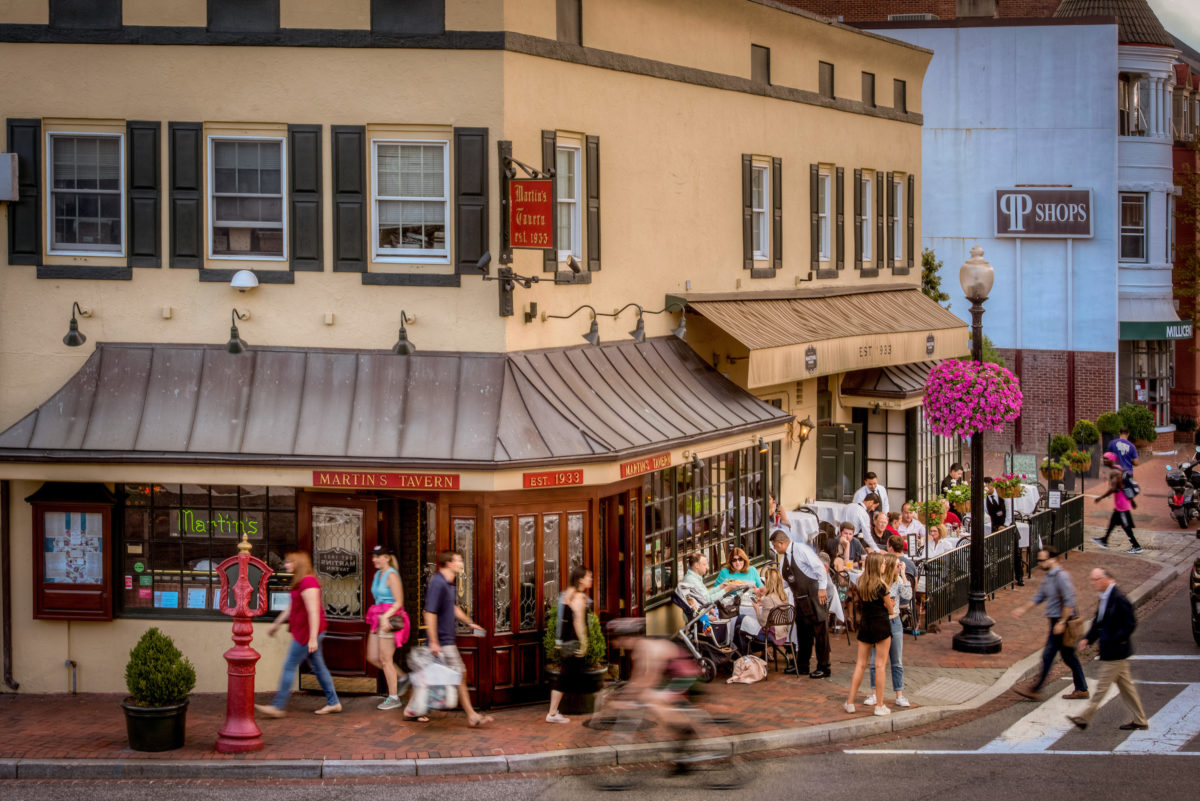