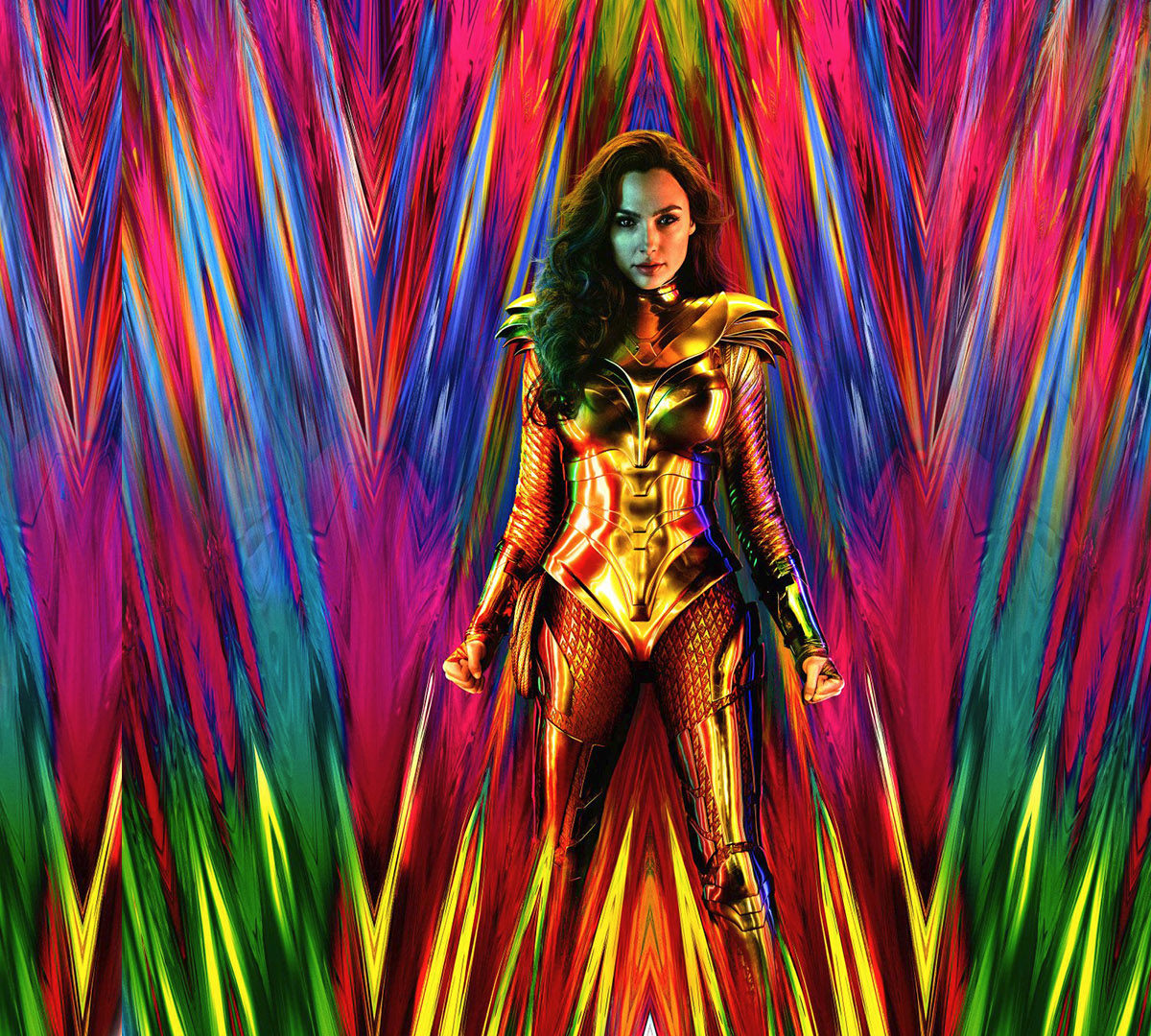 In honor of the home entertainment release of Wonder Woman 1984 – now available for digital purchase, and as a Blue-ray / DVD combo beginning March 30 – we spoke with Matthew Jensen, Director of Photography on the film. The Northern Virginia native grew up frequenting Georgetown, and played a key role in deciding how it would be showcased in several scenes throughout the movie, which was filmed in DC in the summer of 2018.

Check out our interview below!

GBID: You grew up in this area in the 80s. What was the aesthetic and tone that struck you from that time, and how did it inspire your approach to Wonder Woman 1984?

Matthew: What’s interesting about the 80s in DC is the city was such a clash of different styles. While you had the jacket and tie and official government look and feel, and this incredible architecture and very strong pillars of history, it was counterbalanced by a strong indie, and punk, and early hip hop music scene. There was a lot of color and neon, and this loud, bright, in-your-face music style, combined with the buttoned-up culture. It was fun to play with those contrasts in the movie and bring back that loud 80s aesthetic. We were also visiting iconic places like the Lincoln Memorial, Washington Monument, and Wisconsin Avenue and the elegance of Georgetown. We had a great time bringing all of that back.

GBID: What was your adolescent perception of Georgetown, and did that change when you returned in 2018 to shoot the movie?

Matthew: Remarkably, Georgetown had not changed much and I found that I was still able to find my way around quite easily through muscle memory, walking from my middle school through Georgetown University to the medical center, where my mom worked. I could retrace my steps and see how little has changed – other than some gentrification, newer buildings and remodeling, and things like that. Growing up, Georgetown was this elegant, Old World place. Cobblestone streets and brick and these gorgeous row houses. Of course the University was so iconic, as well as the Exorcist steps. None of the power and scale of Georgetown had changed for me when I went back as an adult. It was fun to retrace my steps in that way.

GBID: Punk boutique Commander Salamander was an institution in Georgetown, and we were thrilled to see it come back to life – if only for the movie. Could you share the story behind that decision?

Matthew: The store was an iconic DC place. I went to middle school at Holy Trinity so I was not far from Commander Salamander’s original Wisconsin Avenue location. All the cool girls – whose attention I was desperately trying to get – were always talking about going there after school to buy hoop earrings and day glow sunglasses. It made this indelible impression on me as something so cool it can’t be obtained. Patty Jenkins [Wonder Woman 1984 Director] also spent time in the DC area and was into the punk scene in her late teens. She was always looking for the coolest place in DC and Commander Salamander was on her radar as well.

When we were location scouting, we were walking up Wisconsin Avenue at night looking for several different locations. Patty and the location scout started talking, and they turned to me and said, “What do you think about bringing back Commander Salamander?” I thought this is the greatest, we have to do it. Movies can really excel at bringing back period detail, and we were lucky to recreate the store not too far from its original location. 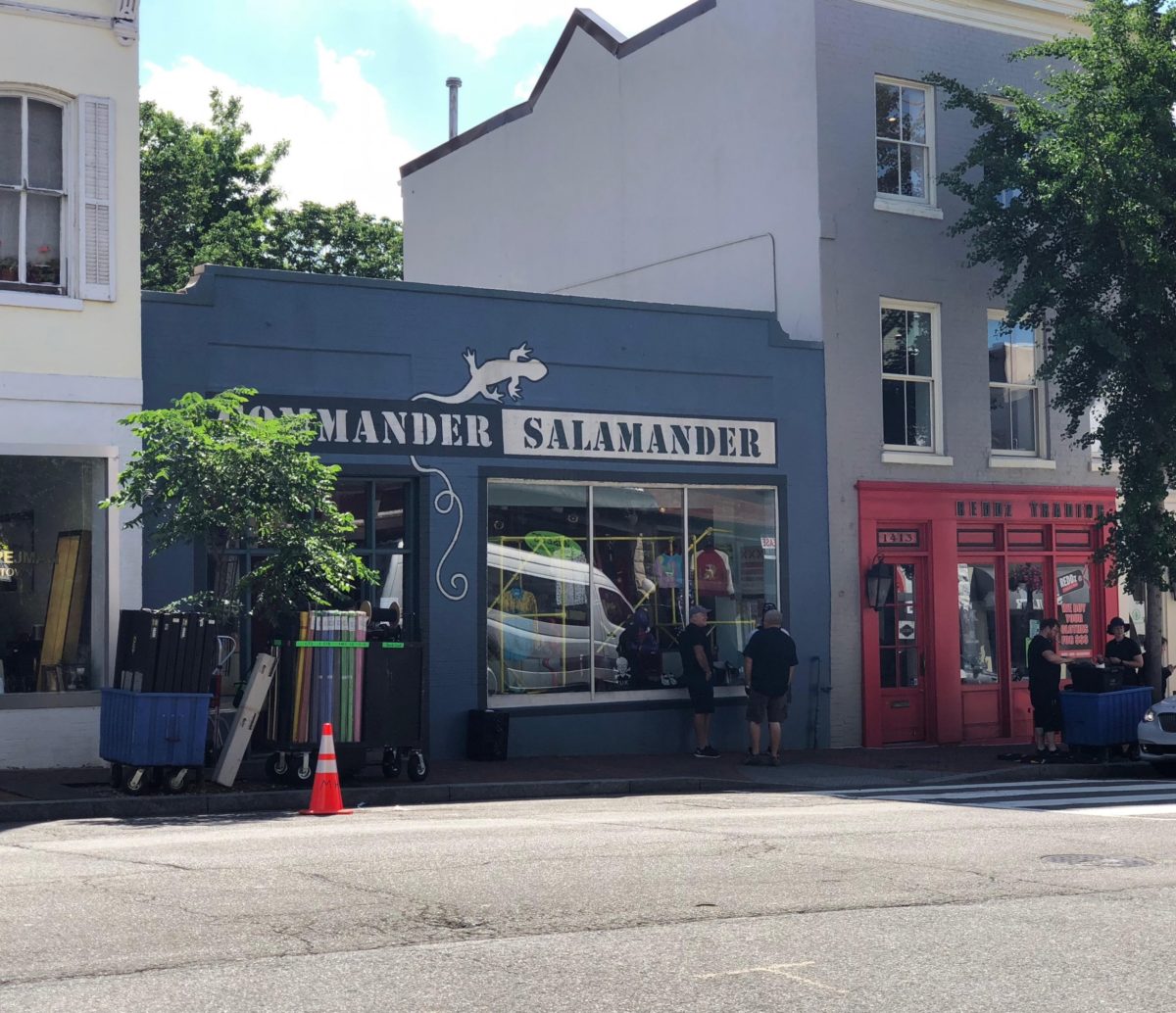 GBID: In the movie, we first see the colorful interior of Commander Salamander before a shot of the exterior. How close did you come to recreating the original?

Matthew: That’s really the art department’s territory, so they did the research on that. The Commander Salamander logo is the big thing I remember. It’s plastered on the outside of the store in one shot. It was mainly that they got the feeling right and the look of the store, and the sunglasses rack and things like that that I remember distinctly. Some of the posters. They did an excellent job. And they had to recreate this all through photos. They were completely reliant on websites that had archived DC at the time. A lot of these things were put together by locals and that information filtered up to us.

GBID: Seconds after the Commander Salamander sequence, there’s a very brief scene on the C&O Canal – another iconic feature of Georgetown. Several of us actually walked over to the Wisconsin Avenue bridge that day in the summer of 2018 to watch that scene being filmed. It’s a few seconds in the movie, but how long did that take to shoot?

Matthew: Because it’s a public space, we scouted the Canal in January of 2018 and went back a couple of times to check it out. The water was down, and we were hoping we’d have water by the summer, but decided we’d shoot it regardless. The permissions take so long because there are so many logistics involved to own that section of the street to do what we needed to do. It took six months to get our ducks in a row with the city before shooting that June.

That Canal sequence is seconds in the movie, but that occupied several days of rigging because there’s a stunt with the bride who falls over into the Canal, and it required all sorts of infrastructure to support her and do the stunt safely, because she’s on wires. We had to shut down the street, and make deals with local businesses to not interrupt their flow. What we do is very intrusive and invasive. We wanted to be respectful of everyone, and of normal life. In total, we shot that sequence over two days, but several weeks of planning went into it as well.

GBID: How do you decide to go on location, versus building a studio set?

Matthew: Patty was adamant, she wanted to shoot as much as she could in DC to get the locations and the feel. There’s no other city like it. Certainly nothing else like it in the United States. It borrows a lot of architecture from Europe, but there was nothing we could recreate to that scale, cheaply. It was easier for us to do it in DC, but the city is a notoriously hard place to shoot because some of the land is federal, and some is controlled by the city. Mayor Bowser sort of unlocked the city for us and was open arms, and a fan of Wonder Woman. We really got full support and that was fantastic. 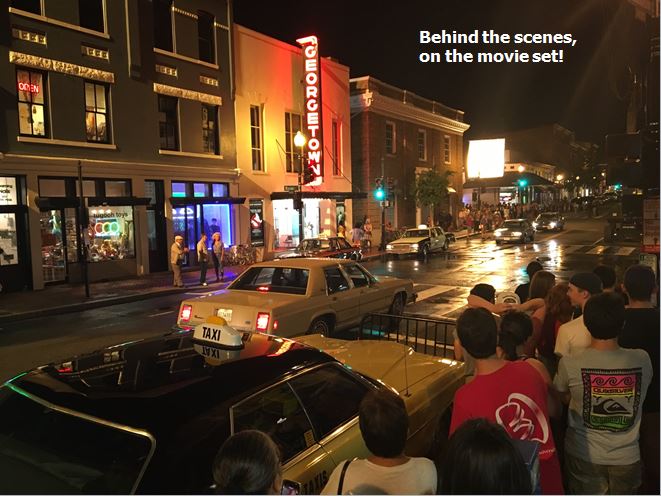 GBID: Is there anything still on your DC bucket list for future movie locations?

Matthew: That’s such a huge question. We shot in DC for four weeks, and I would have loved to have shot the whole movie here. I would love to come back and do a political drama along the lines of All the President’s Men or something. There are so many nooks and crannies in DC that people don’t see. Everyone is used to the National Mall and the corridors of power that you normally see portrayed in movies. I would love to investigate some of the off-beat paths of both Georgetown and other corners of Northwest, and to go into Maryland and Northern Virginia. I’d love to shoot in Old Town and Mount Vernon, and explore those areas. They’re places I remember distinctly from my childhood.