Take a self-guided tour of the Georgetown murals and public art pieces that are bringing new life to our bricks, buildings, and public spaces – from a look back at life in the late 19th century, to one of JFK’s most famous speeches, and the most recognized ‘big bike’ in DC. 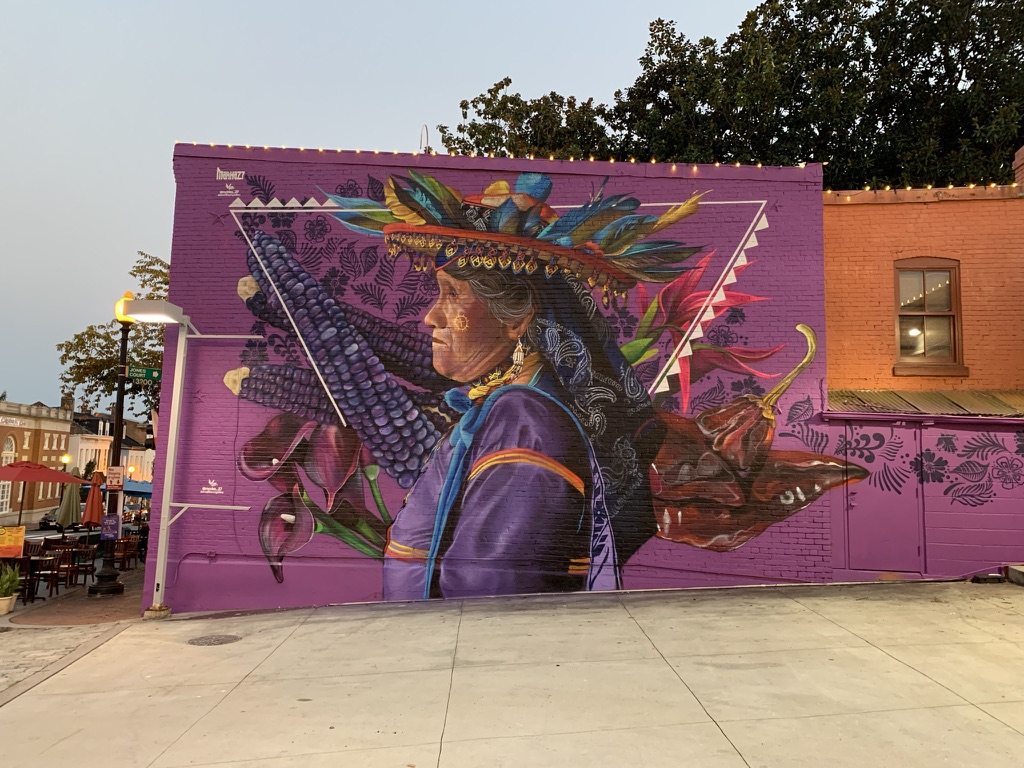 Artist Victor “Marka27” Quiñonez was inspired by the photography of @diegohuertaphoto and the indigenous people of Jalisco, and created this beautiful piece, “Alma Indigena”, through the Murals DC project. According to Victor’s Instagram, the mural features an indigenous Wixárika Elder with ingredients used in many native cultures – blue maiz and guajillo peppers. 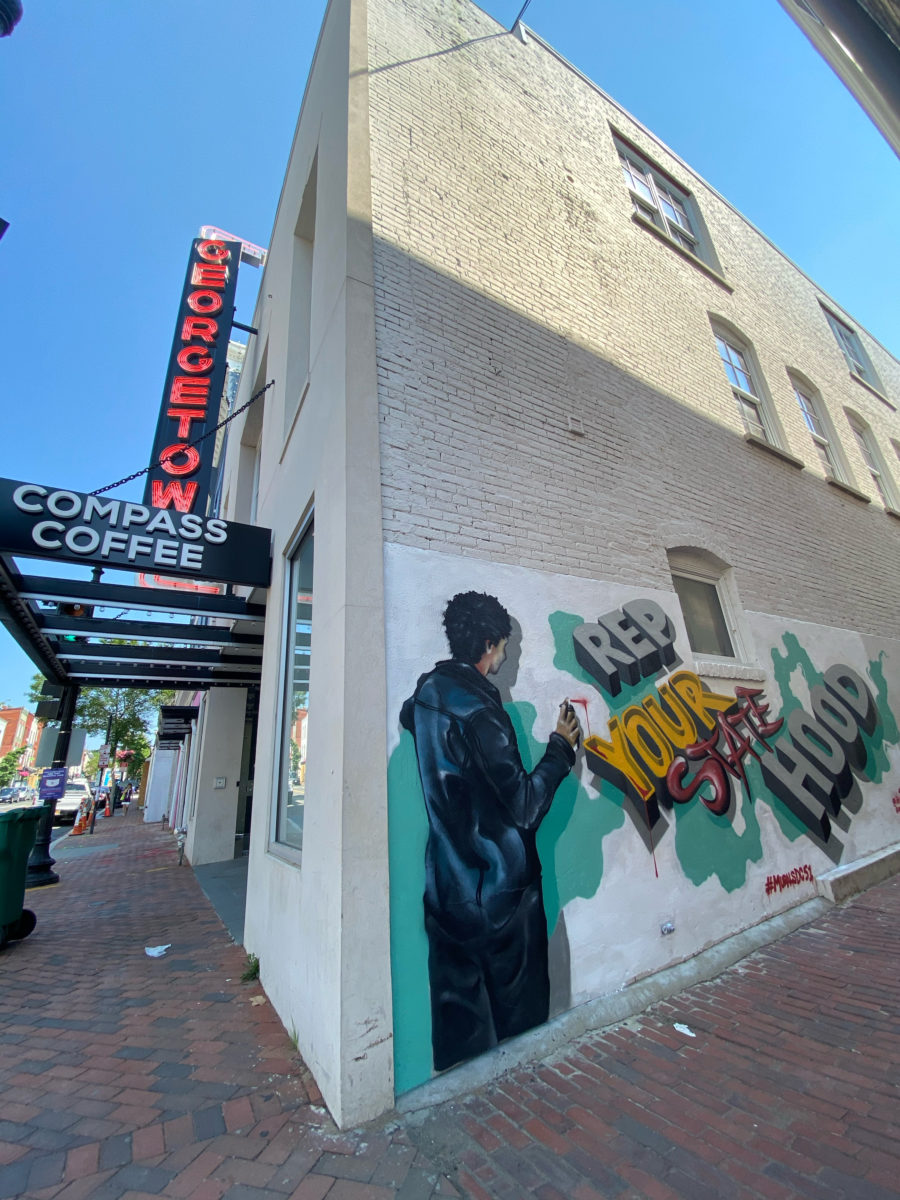 51st statehood advocacy murals were commissioned in June 2020 and are displayed throughout DC, including the first of four consecutive murals on the side of the old Georgetown Theater building by artists @you_are_jah and @dr.rickamortis. Follow #MuralsDC51 to learn more about the DC project. 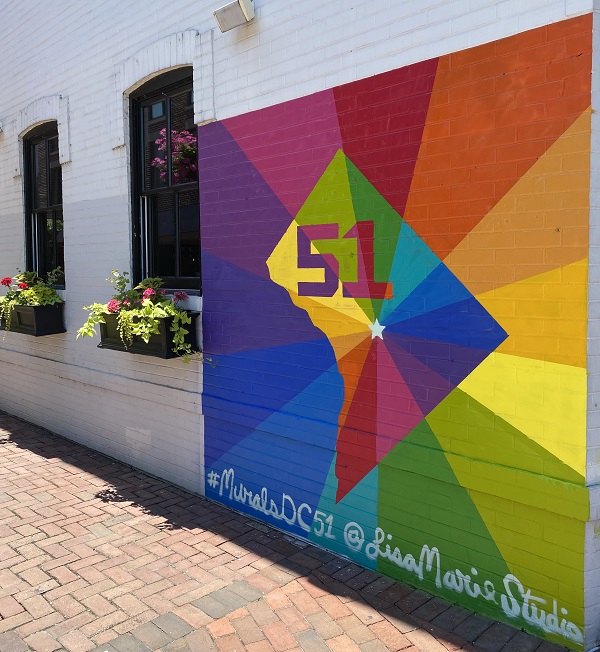 Also part of the 51st statehood advocacy murals (#MuralsDC51) project, this colorful mural on the side of ENO Wine Bar was created in June 2020 by Lisa Marie Thalhammer – the same artist who created the popular LOVE mural in DC’s Blagden Alley. 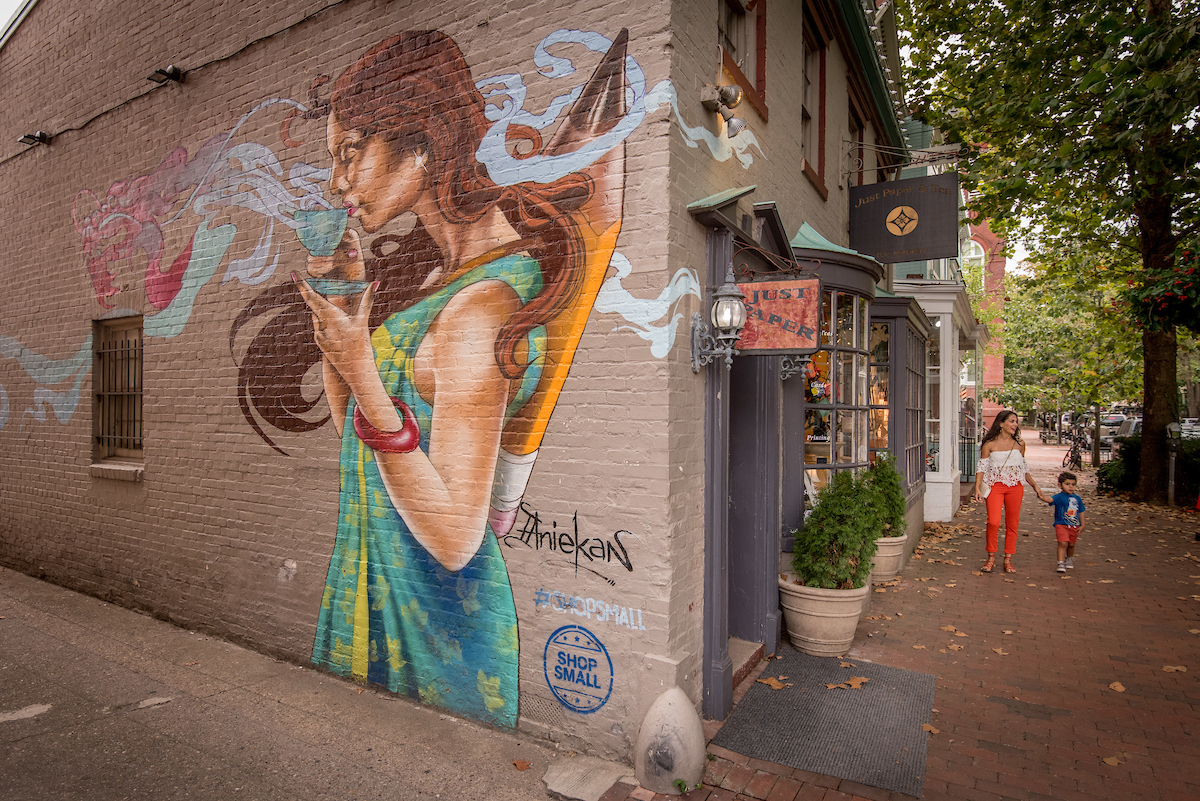 Artist Aniekan Udofia – known locally for his massive murals of Duke Ellington, Frederick Douglass, and George Washington – painted this mural on the side of Just Paper & Tea during a 2015 Shop Small event. 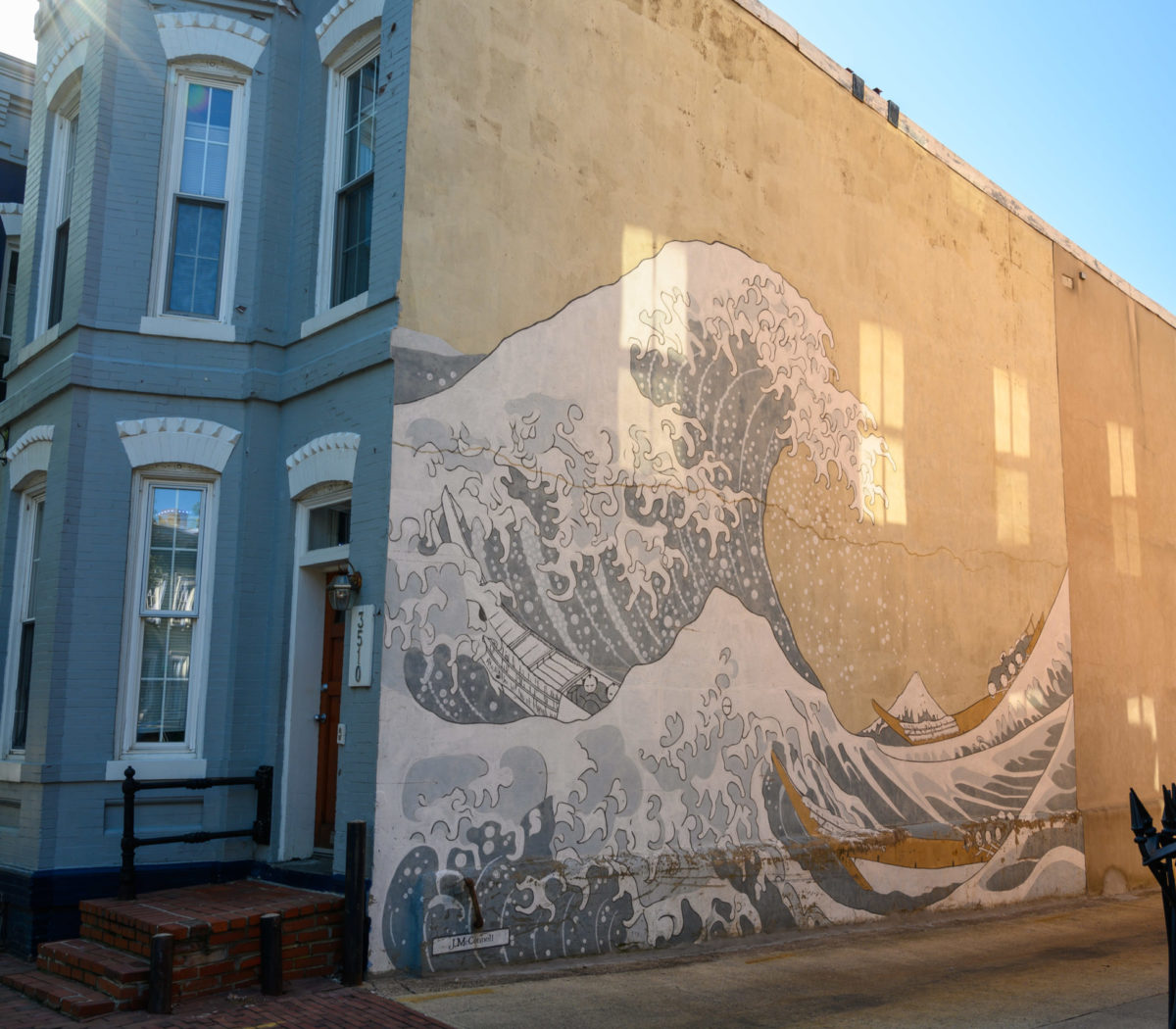 A reproduction of the Japanese print the “Great Wave off Kanagawa,” this mural by J. O’Connell was commissioned by the couple who owned the house, 3510 O St, in the 1970s. 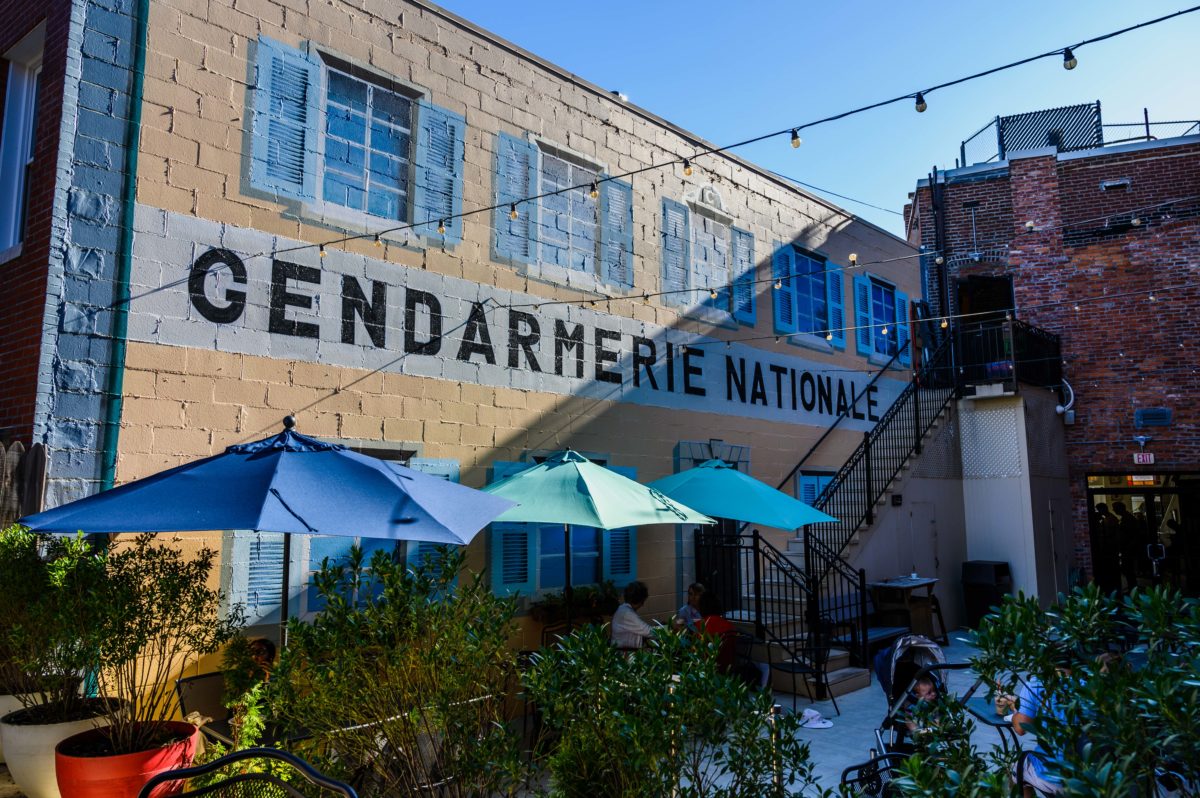 Tucked away in Boulangerie Christophe’s charming backyard patio, this French-themed mural may be the closest you’ll get to Paris while in Georgetown. 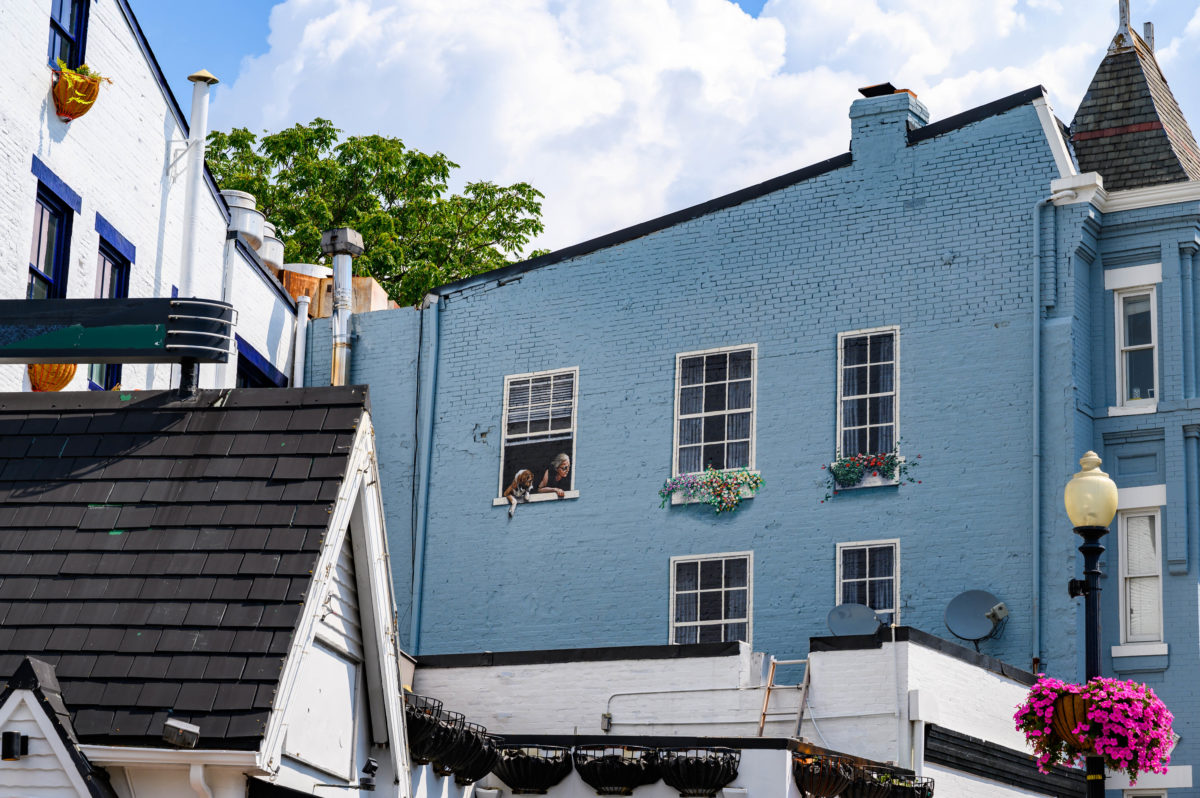 A nosy neighbor (and dog) can be spotted people watching from the windows painted on the side of 3143 N St – an art technique called a trompe-l’œil that uses realistic imagery to create the optical illusion that the depicted objects exist in three dimensions. While you’re there, pop into Cafe Georgetown next door for an entirely different kind of art, of the latte variety. 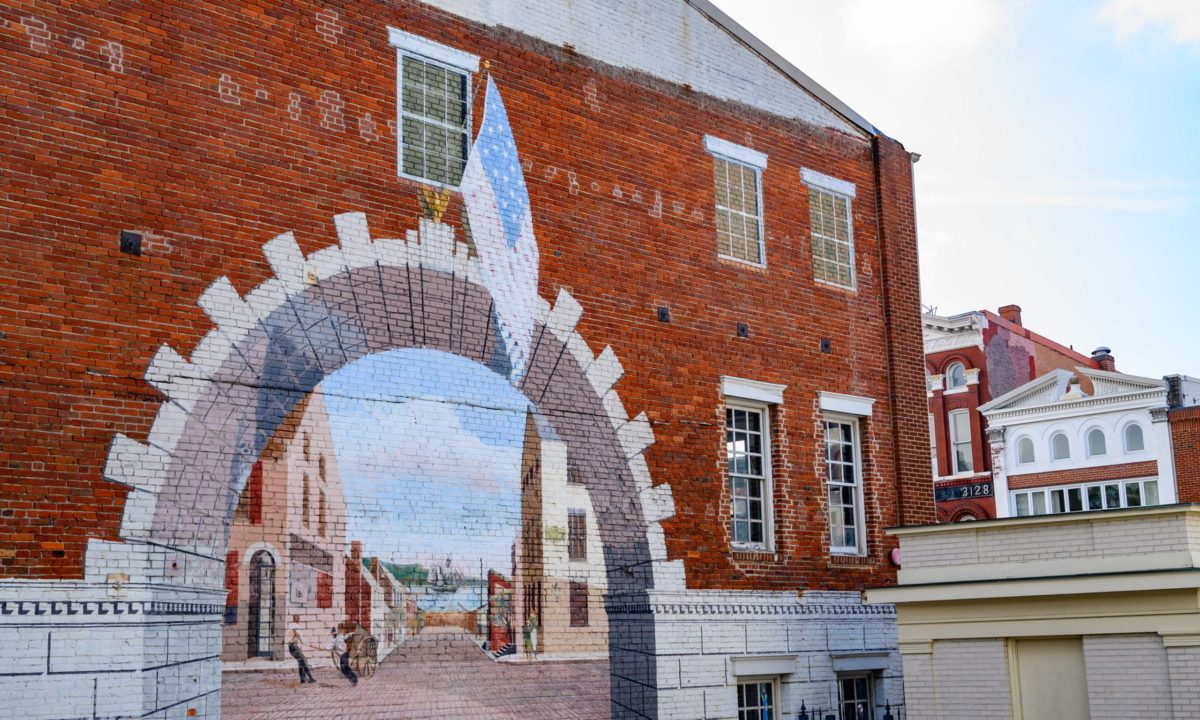 Bryan King’s 1992 mural on the side of America Eats Tavern (Old Glory, at the time) is another trompe-l’œil offering a look at life on the Georgetown waterfront at the turn of the 20th century. According to dcmurals.org, the artist researched Georgetown’s early topography at Georgetown Library before he began working on his piece, and included his signature within the mural. See if you can spot it!

Not much is known about the cheerful flower mural that adorns the side of Kintaro – the Japanese restaurant on 33rd St near the C&O Canal. 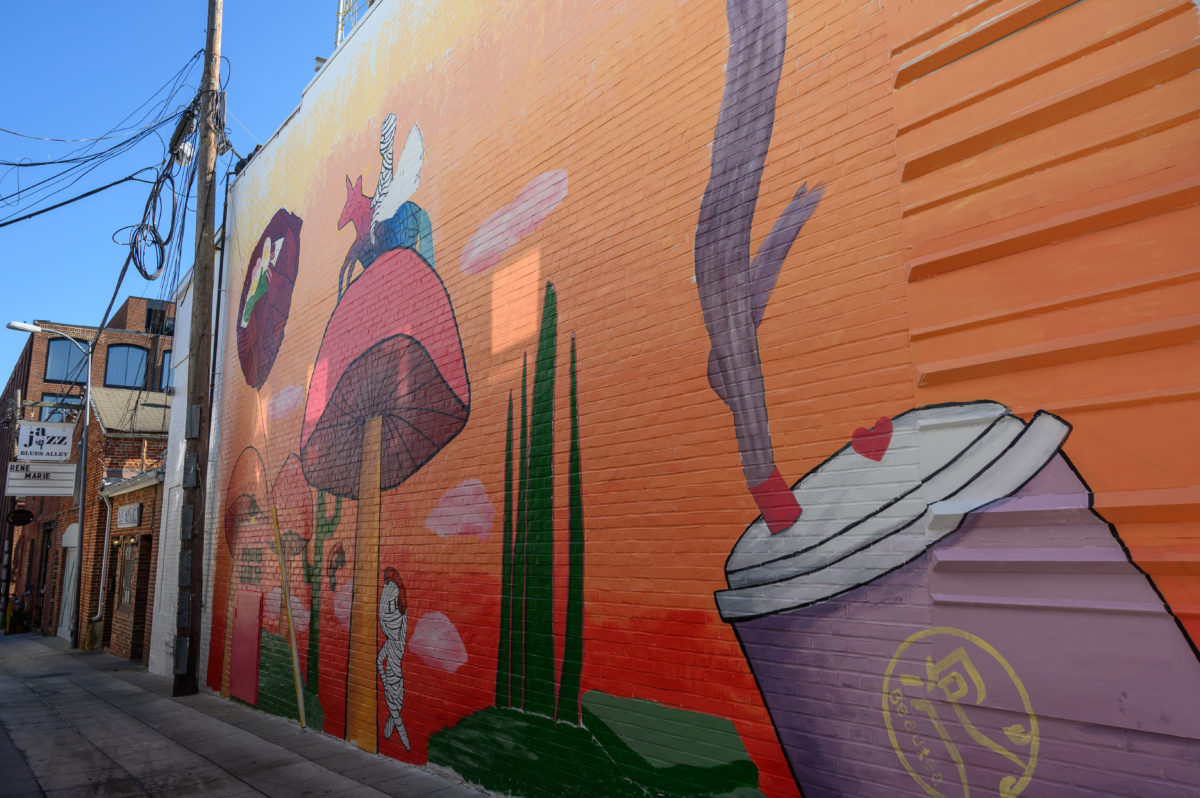 Georgetown’s Fall 2019 mural addition is a colorful piece painted on the side of Reren Lamen & Bar, an Asian restaurant opening in January 2020. The mural’s fantastical mushrooms and flying animals line the building as you enter Blues Alley. 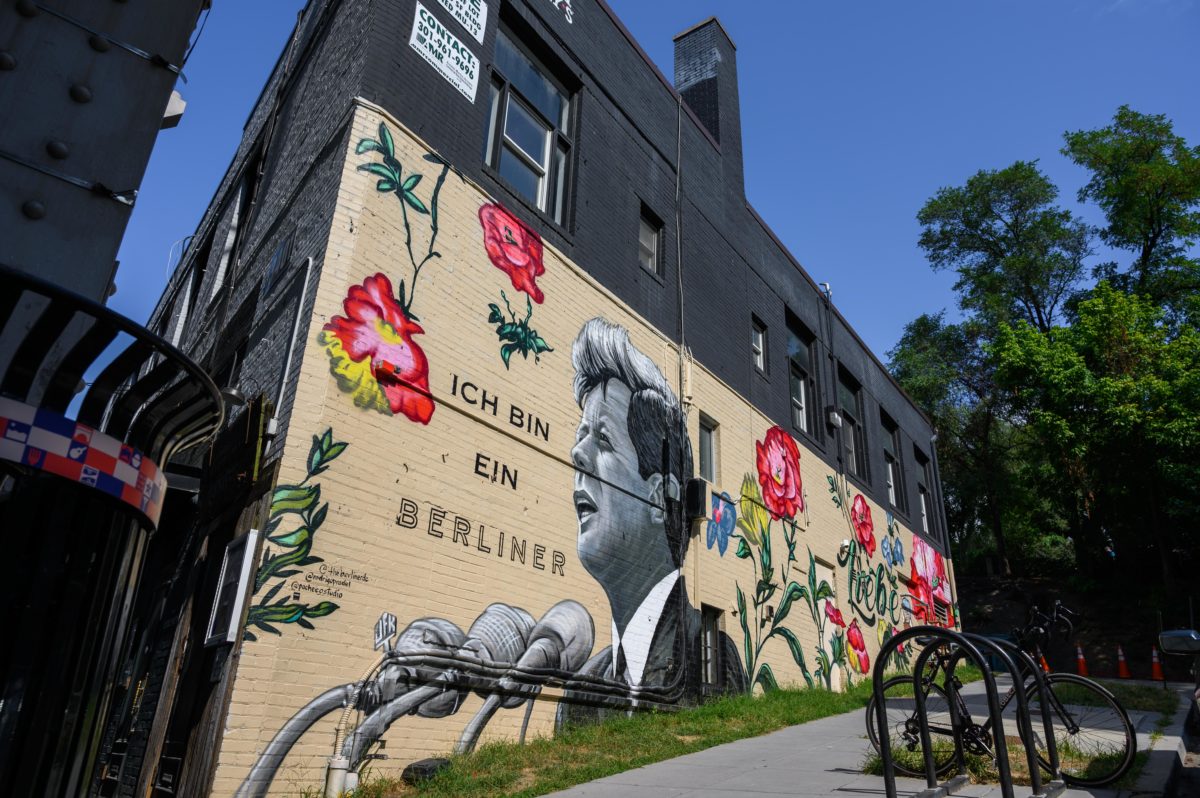 JFK’s famous “Ich bin ein Berliner” anti-communist speech – given nearly two years after the Berlin Wall was constructed – is depicted in Rodrigo Pradel’s mural on the side of The Berliner. Formerly Malmaison, the space is now a German beer hall – a natural fit for the mural. 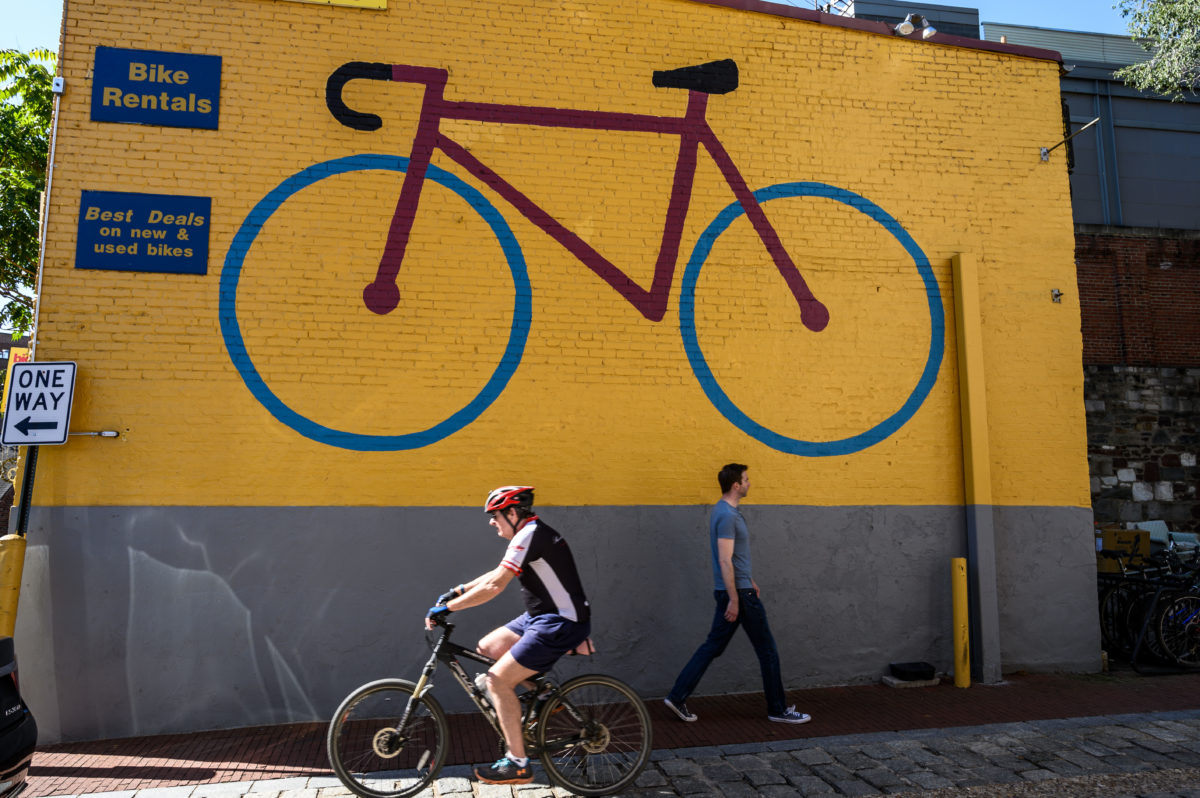 Everyone seems to know the big bike on the yellow wall in Georgetown. Painted on the side of Big Wheel Bikes as you enter Cady’s Alley from 33rd St NW, the Instagram-worthy mural is a favorite among cyclists looking for a shot of their bike with a bright pop of color behind it. 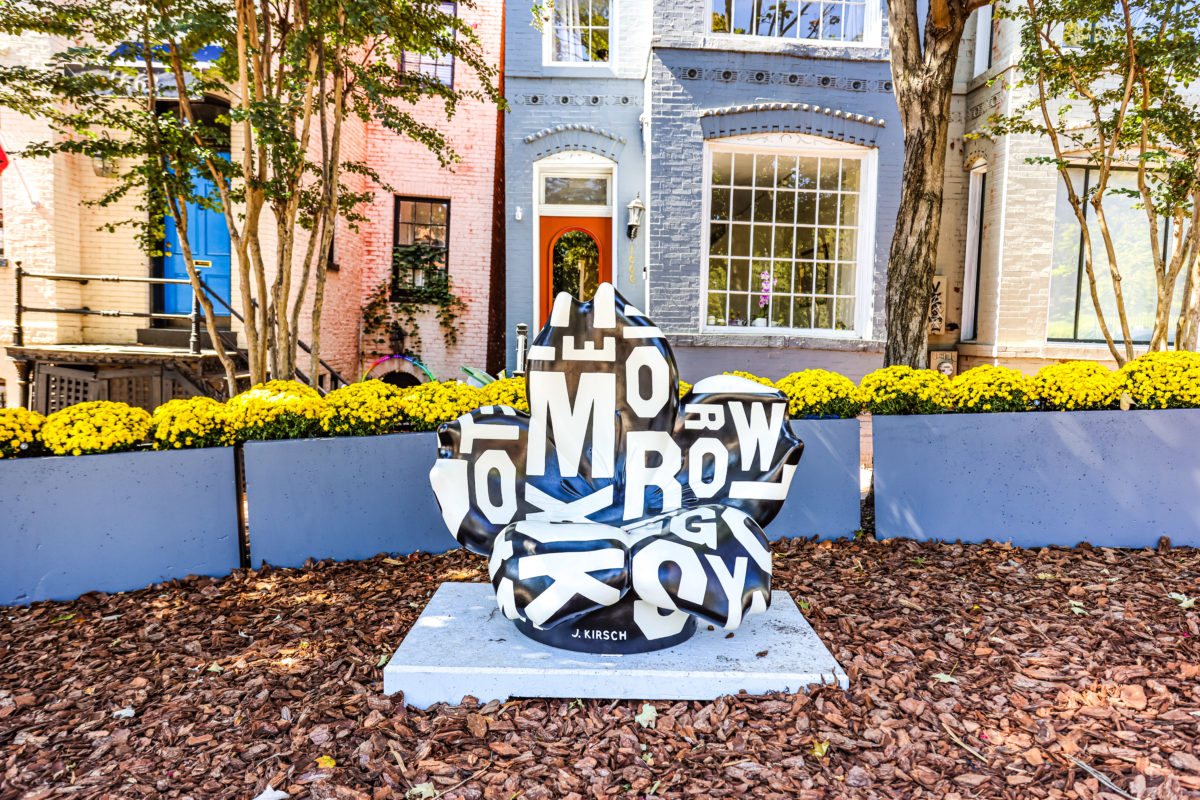 Created by Jesse Kirsch for Art in Bloom, the National Cherry Blossom Festival’s 2021 public art exhibition, “ABCDC” now permanently resides in Georgetown. The piece was inspired by antique wood type from the world of letterpress and the alphabetized streets of DC. Each letterform has a unique shape and history – much like the city, its iconic cherry blossoms, and its people. A hidden message among the jumble of letters aims to bring viewers hope for a better day to come. Get your photo opp sitting in the petal! 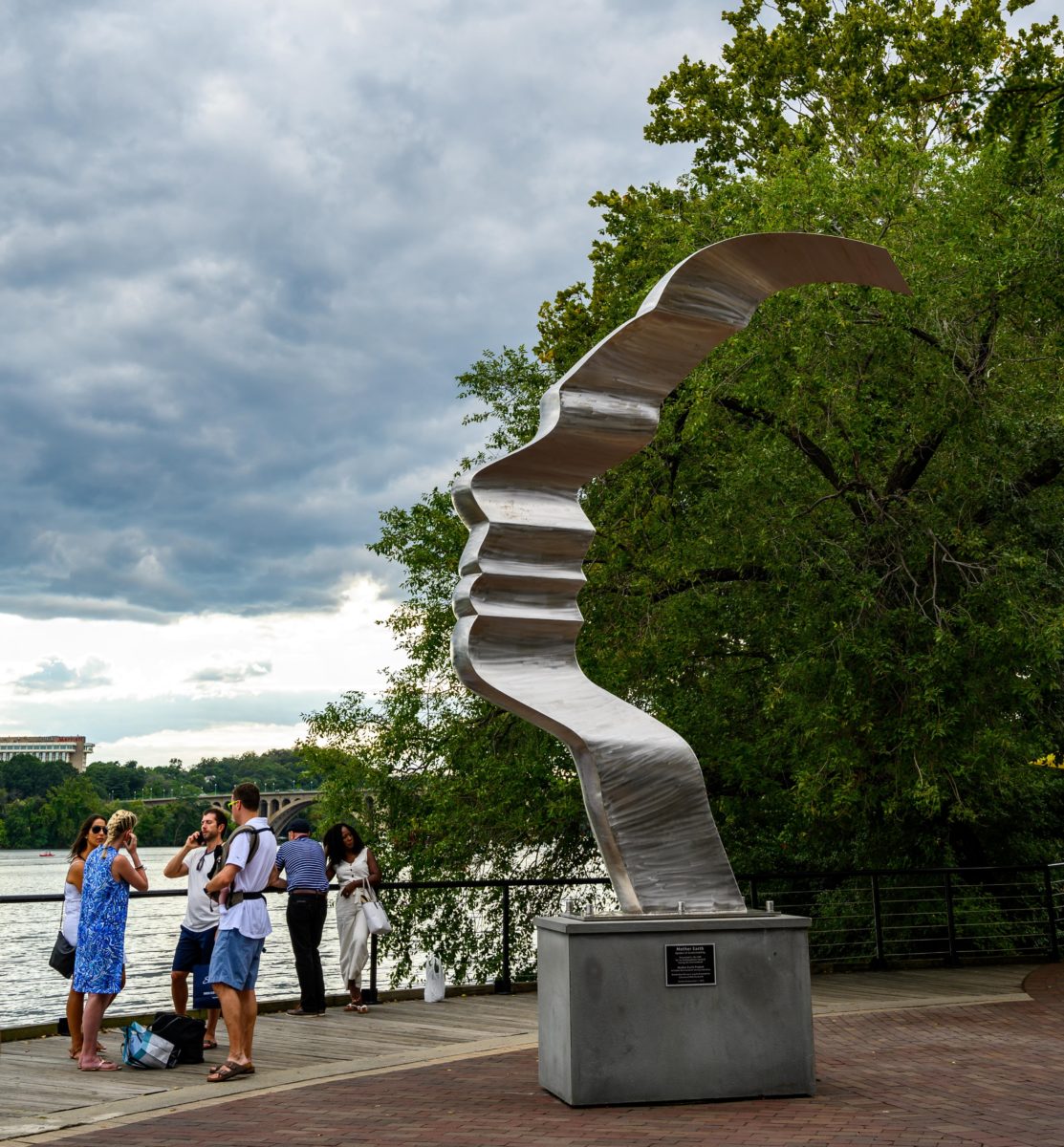 Barton Rubenstein, co-founder of the Mother Earth Project, installed “Mother Earth” in January 2017 at the end of 31st Street NW on the Georgetown waterfront. The Chevy Chase-based sculptor and public artist founded MEP as a multi-pronged initiative to raise awareness of environmental issues. Rubenstein created the 15′-tall stainless steel sculpture – the first of several throughout the world – as a symbol of solidarity for global sustainability, and hope for the world in the face of a changing climate. “Mother Earth” connotes neither race nor nationality, and is symbolically facing downstream toward the world’s oceans – a body of water connecting all nations. 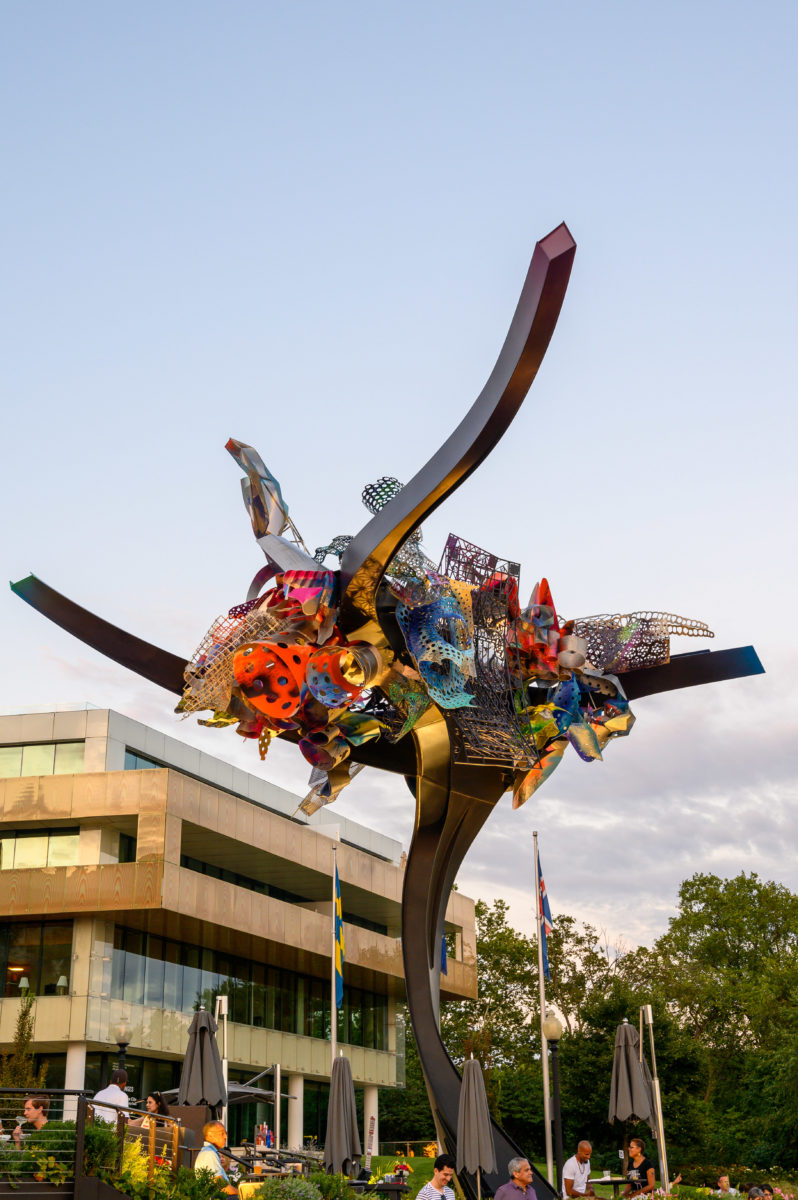 Weighing 28 tons and measuring 41 feet tall, “Scarlet Natural Chaos” by Arnie Quinz was completed in 2017. Overlooking the Georgetown Waterfront, the sculpture behind Sequoia restaurant features an assemblage of unique, sculpted organic forms brought together in a nest-like composition. According to the artist, the piece was inspired by both femininity and the Scarlet Oak tree – rooted in the history of DC, and reinforcing the cultural link between civic symbolism and natural imagery. Quinz says it’s a statement on modern culture’s loss of connection with nature. 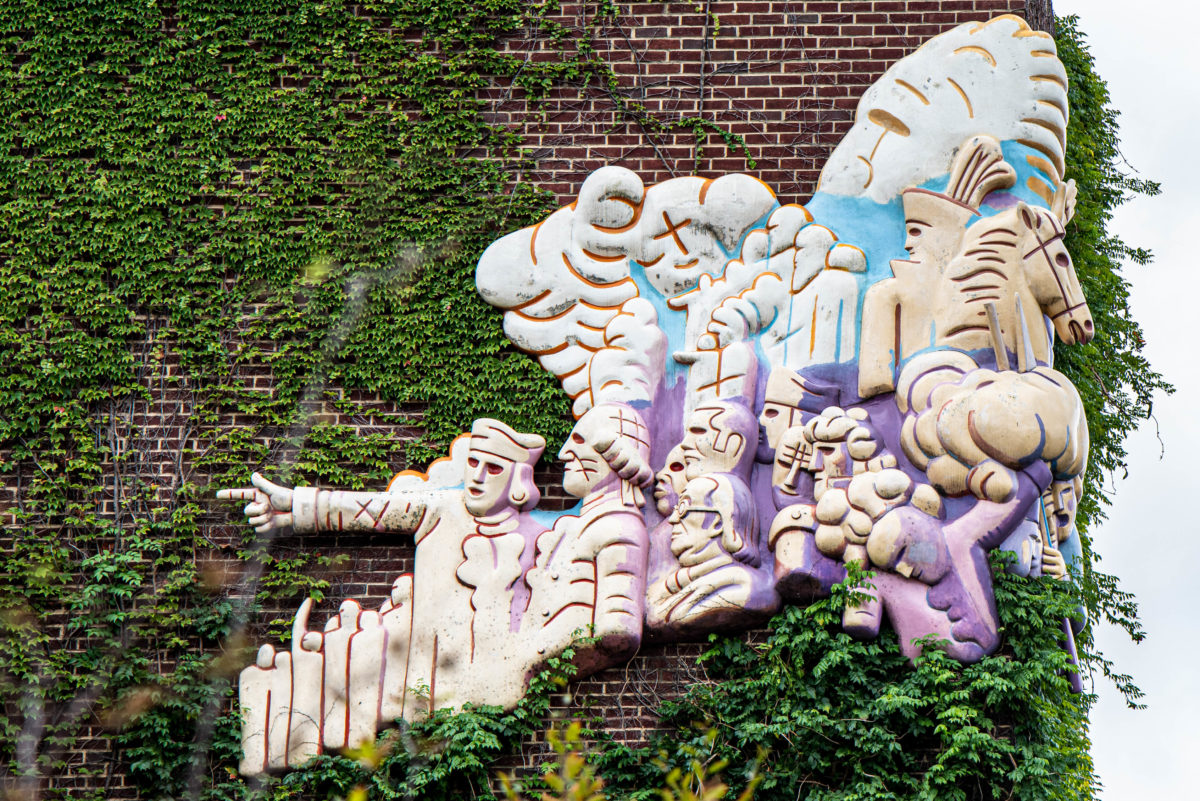 Sculptor Raymond Mason created these bas-reliefs on one of the Four Seasons Hotel’s ivy-covered exterior walls, featuring a swirl of clouds, figures, horses, muskets, and the images of George Washington and Pierre-Charles L’Enfant. According to the Four Seasons, the artwork represents the pair’s meeting in a Georgetown tavern in March 1791, when the U.S. President and the French architect worked on designs for the site of the country’s federal government.