Profs & Pints presents: “When Pirates Prowled the Chesapeake,” with Jamie L.H. Goodall, professor at history at Southern New Hampshire University, scholar of piracy in and around the Atlantic, and author of Pirates of the Chesapeake Bay. The Chesapeake Bay is an area intimately tied to a fascinating history of intrigue, plunder, and illicit commerce. From its first pirate, William Claiborne, to the infamous Captain Kidd, commerce raiders influenced the ebb and flow of the bay’s economy. Some pirates attacked on the bay while others simply made it their base of operations for depredations in the West Indies. Learn about these nefarious rogues from Professor Goodall, an expert on Atlantic World piracy and privateering, particular during its Golden Age from 1650 to 1730. She’ll discuss the findings of her extensive research on pirates’ exploits, lives, and trials for her well-received book Pirates of the Chesapeake Bay: From the Colonial Era to the Oyster Wars. Her talk will focus heavily on individual stories based on men like Theophilus Turner, Blackbeard, John James, and Louis Guittar, who pillaged and plundered their way between Baltimore and Hampton Roads. She’ll discuss what types of people got involved in acts of piracy and what roles they took. You’ll also learn about the types of ships pirates preferred, how some of them managed to evade capture, and the role of women in the realm of pirates within the confines of the Chesapeake Bay. Among the questions Dr. Goodall will tackle: Why the Chesapeake? Which parts of it were more prone to piracy? What made pirates view this region as both a haven and a prime target? What brought it all to an end? Whether you’re sitting down with rum, ale, or just a glass of soda or tap water, you’ll be glad you’d climbed aboard for this scholarly voyage. (Advance tickets: $12 plus sales tax and vendor fees. Doors: $15, or $13 with a student ID. Listed time is for doors. Talk starts 30 minutes later. Please allow yourself time to place any orders and get seated and settled in.) 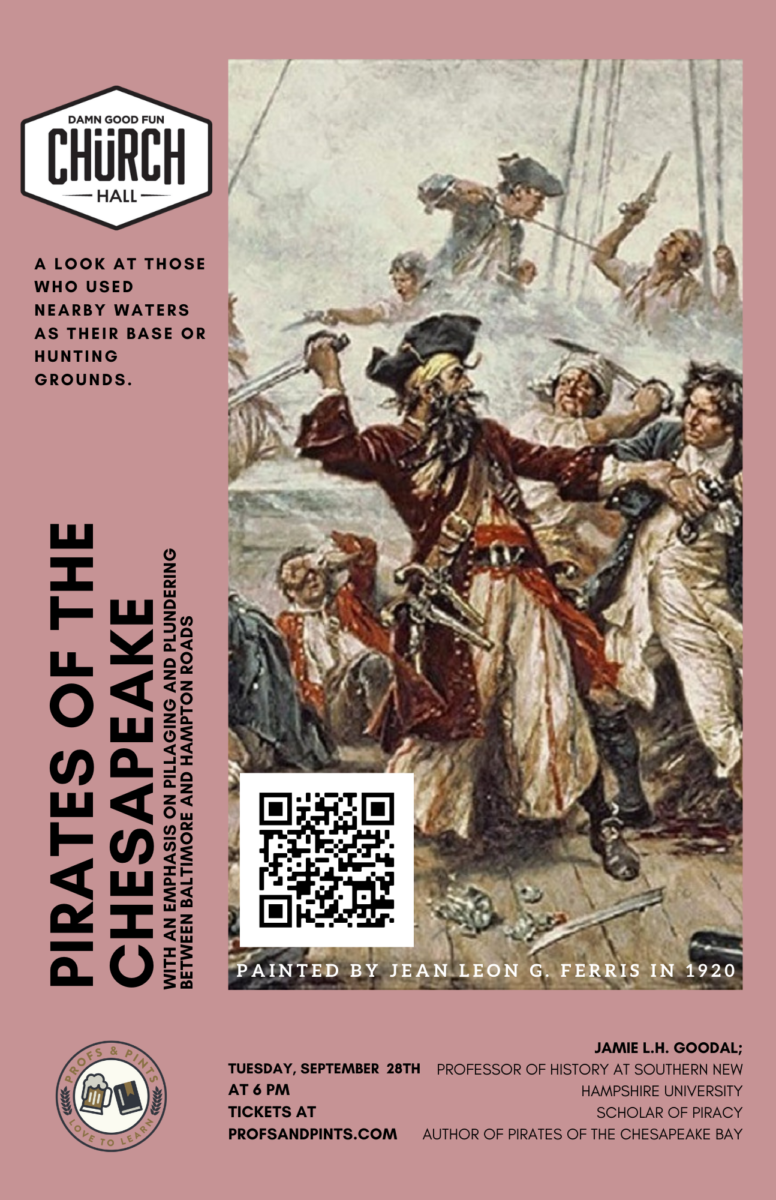 Activities, Drink, Food
Back to Calendar